In addition to raw talent, lead vocalist Ron Porter brings a lifetime of experience to AUGUST. He began playing percussion and the drums in the sixth grade and discovered singing around the age of 14 in eighth grade. While in late elementary and middle school he took snare drum lessons which resulted in performing with his junior and high school bands while growing up in Normal, IL, in the 1950’s and 1960’s. From eighth grade through college he performed with various bands, playing pop, jazz, funk, rock and roll, soul and country music. These varied experiences gave Ron the depth and range that has shaped his style.

Destiny knocked on Ron’s door after graduating from Illinois State University. Given the choice of being a performer on the road or a teacher, he chose the latter, and spent the majority of his career in the West Aurora (IL) School District teaching drama and theater. Always the performer, and even while teaching, he continues singing and playing drums and percussion with various bands throughout the Chicago area, including a short stint as the drummer of AUGUST in 1975.

While on one of his many travels, Ron sat in with the noted drummer, Les DeMerle, for a show on Amelia Island, FL. Additionally, he had the opportunity to play for Shirley King, daughter of the legendary guitarist, B.B. King.

Ron took over the reins as lead vocalist with AUGUST in early September, 2007. 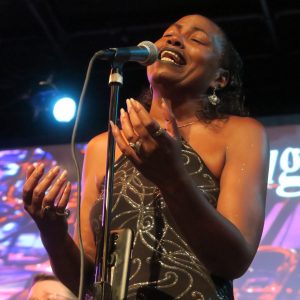 Because of her mother, a soprano with Chicago Lyric Opera House and the Grant Park Symphony Orchestra in the 1950’s, vocalist, Regina Rhymes, was surrounded by, and instilled with a love of music at a very early age.

She briefly took piano lessons as well as vocal lessons at the early age of 3. Later, she again studied voice with instructor, Hortence Love.

Regina credits her experience with a church group as having a large influence on her belief in the emotional and spiritual healing power of music. She and the group, the ELCA Global Musician-Educators, traveled to Germany to perform a series of concerts to promote racial harmony and unity within the Lutheran Church through music.

Being on call for various recording session vocal work, in addition to performing with August, Regina has expanded her horizons and name recognition to include movie extra casting calls.

As she says, “I am always ready for new adventures as a performer!”

Guitarist, Jeff Rutter, began his musical life with trumpet lessons at the age of 9. He continued trumpet lessons off and on throughout grade school and college. At age 10, Jeff added guitar to his repertoire and for 6 years, studied guitar with Fred Filipiak. Throughout his educational career, he continued his musical education, playing with his school’s concert, marching, pep and jazz bands.

He studied vocal education at Northern Illinois University, as well as participated in the famed NIU jazz program.

After leaving college, Jeff began his professional performance career, touring with such acts as “The New Seekers” of the song “ Girl” fame, Tommy Boyce & Bobby Hart (composers/performers of many of “ Monkees” national hits) and R&B legends, “ Drifters”. In addition to performances with his main instrument, Jeff’s also demonstrated his multi-instrument talents and skills with performances on bass, trumpet, sax, trombone, tuba, keys and drums.

Today, Jeff still “tours” with a school music-lecture program that provides basic music education and practices to schools and municipalities’ summer youth programs throughout the Chicago and southern Michigan areas.

Jeff performed with August from late 2012 through the spring of 2013. 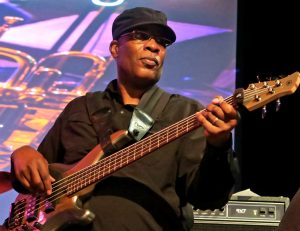 Bassist John Alexander comes to AUGUST with a rich Gospel and R&B background. John grew up in Cleveland, Ohio taking formal lessons on both violin and piano. When his 6th grade jazz band director noticed how he enjoyed plucking the bass lines on his violin strings, he suggested John move to the upright bass; John fell in love with the role of the rhythm section. Surrounded by the solid bass lines of the late 60s and 70s that got people moving, he knew he wanted to become one of the unsung heroes in the rhythm section. John was influenced by the bass lines of Motown’s James Jamerson and others like Verdine White of Earth Wind and Fire and Larry Graham. John switched to electric bass and took some formal lessons which led him to an opportunity to start playing for his church choir. Having played with a number of groups after relocating from Milwaukee to Aurora, you can find John playing with his church on Sunday mornings and lending his talents to AUGUST.

Steven Eaklor has added his keyboard talents to the AUGUST rhythm section, bringing a wealth of experience to the band in addition to his own style which enhances the AUGUST sound. A versatile performer, his background in theater organ, jazz and gospel music has shaped his unique and imaginative style. These talents are also evident in his compositions, arrangements and orchestrations.

Steven began music training at the age of 6 on the Hammond Chord Organ, and “graduated” to the Hammond spinet and console organs a few years later. Choosing to pursue a career in music, he graduated with a B.A. in Music Performance from Adams State College in Alamosa, Colorado, majoring in trumpet performance. He eventually became Director of Product Planning and Development with the Hammond Organ Company. Over his first 15 year tenure, he became responsible for many of the sounds, features and portable instruments the company produced, most notably, the portable Hammond B-3 single and dual manual instruments. After a 7 year hiatus, Steven has returned to the company to continue his work.

While engulfed in pop music projects, he also has placed a special emphasis on classical organ literature and Gospel music in addition to his theatre and pop organ projects. Additionally, he continues his writing and arranging for various vocal and instrumental groups. Performance-wise, Steven has performed throughout Europe as well as Australia and New Zealand. Additionally, his performances have taken him to Singapore and Malaysia, not to mention Canada and throughout the United States.

One of the founders of AUGUST, drummer Mark Werthmann began his musical life with organ lessons at age 10. He was introduced to the drums by his cousin; for his 14th birthday, received his first set of drums from his parents. (They made the down payment and he finished paying for them with his paper route.)

By age 15 he was performing with local bands in the Aurora, Illinois, area before participating in the formation of AUGUST in 1972.

While attending Waubonsee Community College (IL), Mark took trumpet lessons for two years, playing fourth chair trumpet in the college’s jazz band as well as drums in the school’s concert band. Besides playing drums and keyboards, and in addition to his trumpet lessons while in college, he also learned the basics of playing the reed instruments such as clarinet, saxophone and flute as well as the “brass” instruments: trombone, French horn and other valved instruments.

Although predominantly self-taught, he did study for a short time with Chicago’s “The London House” drummer, Marshall Thompson. His studies continued with well known Chicago-area drummer Mike Murphy. Werthmann was also one of the drum line instructors for the Fox Valley Raiders Drum & Bugle Corps in the late 1970’s.

After leaving AUGUST, Mark was a member of the pit orchestra for the Miss Illinois Pageant as well as various musical plays. Additionally he performed with various local bands, one which was the house band of Big Rock Recording Studios where he participated in the recording of numerous radio jingles and commercials before settling into a quartet whose career lasted for 10 years and included his eventual wife, Bonnie. After taking a musical hiatus for a number of years, he has returned to the drum chair with AUGUST.

In February, 2006, Mark, along with Gary Mackey, began the reformation of AUGUST, with the vision of what it would become. 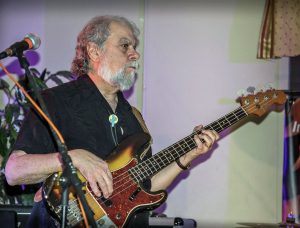 Bassist, Dean Milano, comes to August with a long resume’. Beginning his musical journey with the accordion at age 8, Dean continued playing and taking lessons from various teachers throughout his development, generating his talent and interest in performance and his performance instruments: accordion, acoustic guitar, upright bass, and, of course, electric bass.

Although he was never enrolled in, or performed in any bands while in school, Dean began his performance life in 1966, and over the years, he has performed with around 75 various bands and performers, most notably, “The New Seekers”. He has personally recorded 3 CD’s, and written and/or recorded over 50 original songs.

Not limiting himself to music, Dean is the author of the 2009 book, “The Chicago Music Scene: 1960s and 1970s (Images of America)”, which is available on Amazon, as well as his personal website, www.toys-n-cars.com.

“The dream is alive!” At the age of 14, Gary Mackey was first introduced to music through the Beatles. He begged his mother for a guitar and she gave in. She bought her son a Gibson 335 guitar. This was the beginning of the dream. At age 15, he became responsible for one of many small groups in the Fox Valley being born. His involvement with music became his obsession. Listening to music and wanting to reproduce the sound was as important then as it is today. By the age of 17 he was playing bass guitar and enjoying every minute of it. His passion at this age was to organize his fellow musicians into something more than just a “garage band.”
He joined his high school band and played the baritone sax though he could not read music. This made for an interesting challenge for the band director.

AUGUST, the band, became a reality in the early 1970’s. To all involved it was an exciting time…little did he know what the future held for them. Because of career and lifestyle changes, Gary embarked on a 30-year sabbatical but never lost his passion for the music.

In his living room today, sits a 6’8″ black satin Kawai Artist Grand piano along with numerous bass, acoustic and electric guitars. In February of 2006, Gary had a reawakening and called former drummer and band member, Mark Werthmann, and simply said, “We’re puttin’ the band back together!” What happened after that was a miracle.

And the dream continues…

Visit our Shop to order yours today before they sell out.